Fortune Keno is yet another great game from the casino games offering that is found at Slots Heaven. The game is a popular one from the extensive list of arcade games that can be found on the casino site. The casino site offers other versions of Keno, and this version is one of the special ones with its mystical twist. The Fortune Keno game is set on a background of deep purples, while in the foreground is the fortune teller with her crystal ball. Whenever the fortune teller looks into her crystal ball to help determine the numbers, the ball lights up, after which the winning keno arcade games numbers are launched. 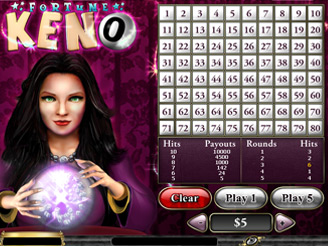 The Fortune Keno arcade games are based on regular keno games that are found in online casinos and in land based casino games. The game is a fixed odds keno game. While the game is based on regular keno games, it is certainly a more special version of the game. To play the game, players must first place their wagers, having chosen at least two numbers or more, up to a maximum amount of 10 numbers. Players can either choose to play a single game, or they can play a series of up to five games in a row while using the same numbers for each of those games. Players then simply need to click on the Play button, and the game will begin. The software for the Fortune Keno game at this casino slots was designed by the Playtech, the well known casino games software provider.

When playing arcade games, the games are, for the most part, somewhat different, so it is important that players check out the wagering guidelines before playing their chosen game. The Fortune Keno game is an 80-ball keno game. There will be 20 numbers picked for each game. Players will need to make the decision of how many numbers they want from between 2 and 10 numbers, and should place their wagers accordingly. When picking which numbers the player would like to play in these casino games, the player simply needs to click on the numbers that are seen on the screen. Should the player wish to change a number before the drawing, it is possible to do so by simply clicking on the same numbers as before. This will deselect the earlier choices that were made. This great game can be played at Slots Heaven.