Players who love horse racing will often look for horse racing themed arcade games when searching the casino games list, and making the decision about which games they wish to play. Frankie’s Fantastic 7 is a great horse racing themed game that will keep players amused for some time. The game is a fixed odds horse racing game that has been designed by the well known and trusted casino software provider, Playtech, and can be found at these slot games. Horse racing fans are most likely to know who Frankie Dettori was. Players will find the game based on the famous horse racer and some of his horses. Players must choose one of the seven horses that are seen on the screen, each represented by a different color. Each of the seven horses comes with a name. There is Wall Street, Decorated Hero, Lochangel, Fujiyama Crest, Mark of Esteem, Diffident, and Fatefully. 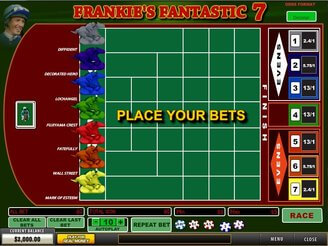 When playing the Frankie’s Fantastic 7 arcade games at the Slots Heaven casino, players may wonder how the game works and if it is simply a horse race that has been generated by the casino’s random number generator software. While the random number generator is at work, the results of the game are actually based on cards that are dealt. The horses each have a different number steps that they should take at the beginning, and later, the steps taken even out. Each horse has between four and six steps that it needs to take in order to reach the end of the race. Cards are dealt for all of the horses that are in the race, The horse that gets the highest card wins and moves one step forward on the horse racing board. Getting dealt a Joker is not really a joke in this game because the horse that gets a Joker is taken out of the game. Players who enjoy horse racing casino games will love the way this game is played.

Playing Frankie’s Fantastic 7 is fairly straight forward. After understanding how these arcade games work, players will find that it is not complicated at all and just as easy to play as a large number of other casino games. Players first need to decide which horses they wish to place wagers on. It is possible to place wagers on as many horses as the player wishes to. There are odds displayed next to the lane of each of the seven horses. When the player has placed the bets, simply pressing the Race button will get the game going. This is a great game to play at Slots Heaven!