Keno is a game that has Chinese origins. This fixed odds game was adapted from its ancient Chinese origin and then became popular in brick and mortar casinos. The potential payouts from a Keno win can be really big, and the wagering amount is usually fairly low. Keno arcade games are very popular with those players who like bingo style casino games. In this game, players get to select their own numbers and after that, the game will continue and players can see if they have picked winning numbers or not. When playing this game at the Slots Heaven casino, players will find that they have a number of choices as far as how many numbers they wish to pick and how many rounds they wish to play. 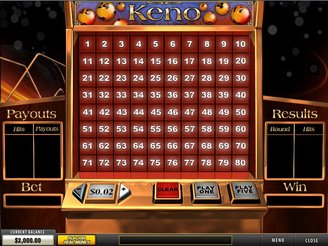 In order to play Keno at these online slots, there is little that a player needs to know in advance. Some arcade games need a lot of explanation, however, for those who already know how to play Keno, they can begin almost immediately. Players first need to select a betting amount from the available betting range. After that it is time to pick the numbers you wish to choose. Players can pick between two and ten numbers, and if the numbers are hit, the payouts will be given accordingly. Players pick the numbers by clicking on the numbers that are seen on the Keno board. The chosen numbers will change color. Players can choose to play either one round, or five rounds in a row, and should select either Play One or Play Five depending on the player’s choice. The Slots Heaven casino software will then pick 20 numbered balls that will match up with 20 numbers on the Keno grid. If the numbers that were selected match up with any of the balls, the corresponding red ball will turn green.

The paytable for the Keno game is found on the left hand side of the screen. When playing casino games, players can made a more informed betting decision by first looking at the paytable. Underneath the paytable, players will see the Bet table, which will show the total bet amount. Players will also see a results section that will show how many numbers were hit in a round and below that, players will be able to see how much their winnings are for that round. When choosing which casino games to play, it is certainly worth checking out the great list of arcade games at Slots Heaven!