If you would like to play 3D casino games, Knockout is a great place to start. Playtech’s arcade games suite has a lot of exciting games, however this one is really one that should not be missed! The animation and the graphics in this game have made it very popular with players at Slots Heaven casino, both for those who are boxing fans, and for those who are not. Players get to choose from one of two boxers. Whichever boxer is chosen will be played by the player and the other boxer will be his opponent, and played by the computer software. 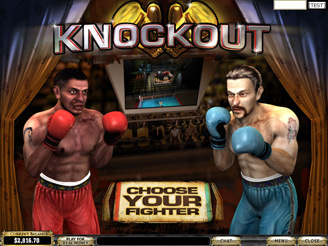 Knockout - Get Your Punches In

When playing Knockout, players need to try to get in the best punches possible in order to win the game. Punches can come from the different directions, and players can pick which punches to use when fighting in this virtual boxing ring. Players are trying to knock out their opponents with some well placed punches. The different directions that the punches come from all come with different multipliers that are won if the punch was a successful one. Slots Heaven players will be sure to try and knock out their opponents in order to add to their winnings in these great arcade games. If you do manage to defeat your opponent, you will hear the sounds of cheers and you can then decide if you wish to stop playing this game or whether you would like another round of playing this fixed odds boxing themed game.

When playing casino games such as Knockout, players should first check out the basic game rules in order to ensure that they know what they need to do during the interactive arcade games. Along with understanding these basic rules that are specific to the game being played, there are also the general instructions regarding wagering that should be taken into account. To begin with, players will need to select a wagering level, and should then place their wagers on the game. After having placed their bets, the online slots player will be ready for their fight! All the information regarding the current fight is displayed on the screen in a window that can be seen on the top right side of the game. Players can keep track of the previous nine rounds, and can look at the history of the types of punches that they used against their opponent, and the size of the multiplier awarded for each one. Play this game and other casino games at Slots Heaven Casino!