The Baywatch Scratch may be following the same theme as the Baywatch video slot game, however, both are modeled on the popular Baywatch television series that flaunted beautiful women lifeguards at the beach. Players will enjoy remembering the sexy ladies from this 1980s TV show, along with the gorgeous male lifeguards that graced their TV screens once a week. Players of scratch cards at Slots Heaven can enjoy this great Baywatch themed scratch card game every single day if they wish to do so. 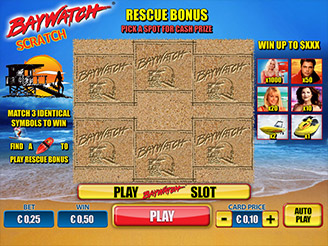 How to Play the Baywatch Scratch Game

The scratch casino games are easy to play and Baywatch Scratch is no different in this regard. Join in the summer fun and sun in this scratch card game by choosing the size of the wager you wish to make, and then clicking on the Play button. There are nine spaces that are seen on the screen, and players need to scratch off these nine squares to reveal the hidden symbols below. Players can choose to reveal each square one at a time, or can choose the scratch all option, which will reveal all nine squares at once. When three matching symbols are seen matched up, players will win a prize according to the pre-determined multiplier for the various symbols. This instant win game is different to some of the other scratch cards in that players can see a symbol that will send them to an additional bonus game, an exciting addition to the scratch games at Slots Heaven.

In case players are looking for that little extra something, this game is not only a straight forward scratch card game, it comes with a special bonus round. Players begin the game as they would when playing any of the other scratch cards from Playtech. If one of the symbols is the classic red flotation device that is used by life guards, players will enter the bonus round. In other casinos games, such as slots, players are used to special bonus rounds, but it is somewhat more unusual to be offered a bonus round in a scratch card game. Once the bonus round is triggered, players will get the chance to find an extra prize by picking a spot under the sand. Players at Slots Heaven are spoiled for choice when it comes to scratch cards, especially when being offered games, such as the Baywatch Scratch, that have bonus rounds.