Jacks or Better is one of the most well known versions of online video poker available. The game is based on the standard five card draw poker, however, rather than playing the game against other people, the player plays against the computer software. The software is the dealer, and only the player is dealt a hand. While most slots give players little advantage over the house, when players are careful to follow good strategy, they will find that it is even possible to end up with a slight advantage over the casino. The name of the game Jacks of Better is connected to the lowest possible winning hand that a player can get. The lowest hand value is a pair of Jacks. Any pair that has a value from 10 or lower is not counted as a single pair. 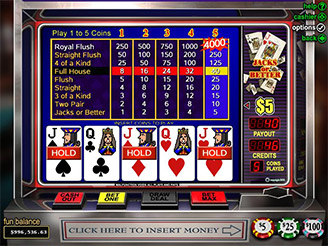 As with most video poker games, the highest hand value in Jacks or Better is the Royal Flush. Players at Slots Heaven will receive a payout of 250 to 1 for a Royal Flush and if they have wagered the max bet, and get a Royal Flush, the top payout is 4,000. A Straight Flush is the second highest hand with a payout of 50 to 1, which is followed by the Four of a Kind at 25 to 1. The Full House is paid out at 9 to 1, and the Flush is paid at 6 to 1. After the Flush comes the Straight with a 4 to 1 payout, and then the Three of a Kind with 3 to 1. Two Pairs are paid out at 2 to 1, and the Jacks or Better winning hand is paid out at even money.

How to Play Jacks or Better at Slots Heaven

In order to ensure that the gaming experience is a fun one, Slots Heaven has made its online casino games easy to play. Players simply need to decide what wager they would like to make, from one coin up to the maximum bet. After choosing the appropriate option, the player simply needs to click on the Deal button. The five cards for this version of video poker are dealt, and the player then decides which cards to hold, and which to discard. Once the choice has been made, the player simply clicks on the Deal button a second time and the cards are replaced by new ones. The player will then see if there were any winning combinations.